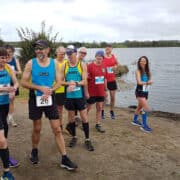 It was looking like a nice, warm Saturday afternoon as 30 runners gathered just north of Horsham Downs for the Lake D Relay … or was it 27 runners, or 29 … no it’s 28 … hold on, Kevin’s still warming up and Andrew can run … it’s 30 after all (thankfully!).
A moment of stress for Lucie as she lined everyone up to select evenly matched teams of 3 for the 3 x 3km relay.

The line-up from fastest to slowest was looking a bit suspect in places … Rob using the excuse of an Espresso Martini induced hangover to slip a little lower down the order. He then went on to produce the fastest lap of the day (10:52) … so the Espresso Martini may need to be part of his regular pre-race build up.

Then the sun disappeared, the wind got up and it started to get a bit cooler as the lap 2 and 3 runners grabbed an extra layer to keep warm.
It was clear from the start that teams had opted for different strategies … some ‘front-loading’ with their fastest runner going first in an attempt to build an unassailable lead, whilst others were relying on a glory-lap from their last runners to steal it at the end.
A slight hold up at the start as Gilbert had to go through the unfamiliar exercise of putting shoes on…then we were ready to go.

Teams 26 (Dave Gunn) and 29 (Iain Rattray) got off to good starts with their front-load approach, but it wasn’t to last as team 25 (Hayden Cressy, Dave Clark and Joe Mace) stormed through to take the honours, just 5 seconds ahead of team 28 (Mark Cornaga, Madison Rattray and Chris Keith). Fastest laps were Rob Townsend (10:52), Chris Smith (11:01) and John Crane (11:06) – I had to get my name in the write-up somehow…

A great job by team selector Lucie, with less than 5 minutes separating all 10 teams. Also some close racing all round … less than a minute separating the 10 fastest times.
If you haven’t been for a run around Lake D you should head over for a few laps one day – it’s a great little circuit and running surface.

Thanks heaps to the organisers for the day and to Wendy and Mike Harris for bringing the BBQ and sausages to cap-off an enjoyable event. 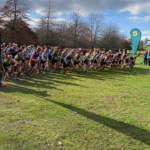 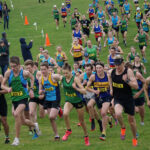