The national road champs held at St Peters School on Sunday saw the Hawks club have total involvement either as competitors or organizers. Saturday course set up was done by a Hawks team ably led by Glenn Sexton in sunny still weather. Race day was the opposite with driving rain and wind gusts that proved a challenge to all. Huge congrats to all the many club members who undertook key jobs in trying weather. It was a huge day and Glenn Sexton and his team did a marvelous job in difficult circumstances.

With over 30 Hawks members running a pleasing number of medals came our way. In the BU13 3km Joe Morgan picked up a silver medal with his 9.55 clocking over 3km after a great battle with the winner who was just 3 seconds clear at the finish.  Brother Adam was 7th in 10.42.

From Mudlark who has a track record of full involvement with national events in the past just a sincere congrats and thank you to all those involved with that road nationals. We appreciated your efforts.

The Athletics New Zealand Road Champs were held on the Tauriko industrial estate circuit Tauranga on Saturday in brilliantly fine weather. The smooth tarmac surface provided fast running. A number of club athletes took part and produced classy results, scored medals and made the medal dais and ran PBs. Four won gold and so make the club honours board.

Camille Buscomb was brilliant – she won her third consecutive national senior road title and recorded a PB of 33.55. Camille ran a confident race going to the front from the gun and powering away to a lead that increased as the race progressed. It was a wonderful win by 45 seconds and just reward for the hard working Hawk. Other club senior women result were Sarah Murphy,15th in 40.22, and Vicki Wade, 18th in 42.50. 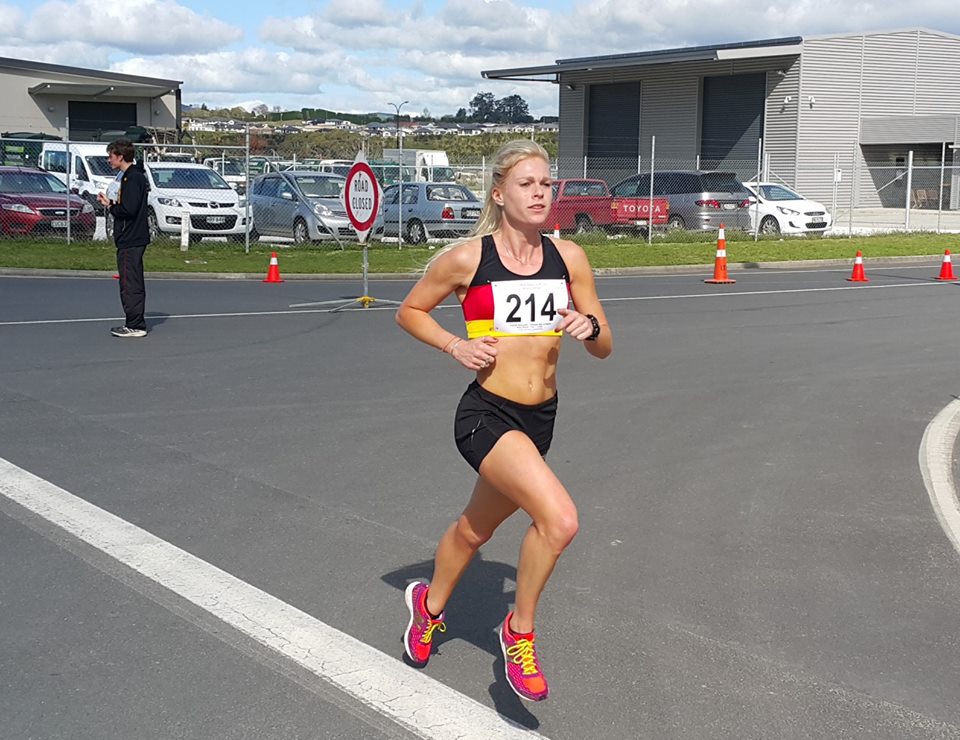 Emerson Deverell also won gold after a busy last weekend racing in the Australian cross country champs at Moonee Valley raceway. She improved on her silver won on the same course last year. It was Emerson’s first national title. The youth 5 kms started in a combined race with W20 and Masters Women so that ensured a fast early pace. Emerson ran with the leaders for the first part but always leading her age group. The fast start ensured a  determined and well merited win in 18.22. In the second half of the race Hawks club mate Grace Ritchie after a cautious start came powering through the field into second some 11 seconds back in 18.31. Grace deserved her silver with good pace judgement. It was exciting to see Hawks take the first two places and even better to witness Gina Butler clocking 5th spot in 19.04 with her best run this winter. With 3 athletes in  the top 5 a certain team gold was not possible as WBOP did not field a 4th runner which was a shame.

Isaiah Priddey picked up a bronze medal with a gutsy run in the Youth 6km just holding out Theo Quax in a desperate sprint down the finish straight. Isaiah clocked 19.40 while Theo was close behind with 19.44. Tristram Connor was 14th with 20.49.

The third Hawks gold medal was won by Steve Rees-Jones in the Master Men’s 10km. Steve injury free at last was all class and set a fast pace from the gun and always led. His lead increased with each lap and an attack of stitch during lap 3 gave him the buffer to cruise and then recover to power away on the last lap to score an impressive win in 32.49 a full minute clear of second. Steve scored three medals a gold for winning overall a gold for being 1st MM35-39 and a silver for being in the second team. Mark Scott was 9th in the MM45 with 36.51. Auckland champion and Hawks past president Simon Yarrow sends his best wishes to the club and he was 4th in Steves grade with 34.48. Kevin Knowles was 5th in MM55 with 39.05.

In the Masters Womens 5km Maureen Leonard took out gold in winning the 55 grade with a pleasing time of 19.58. 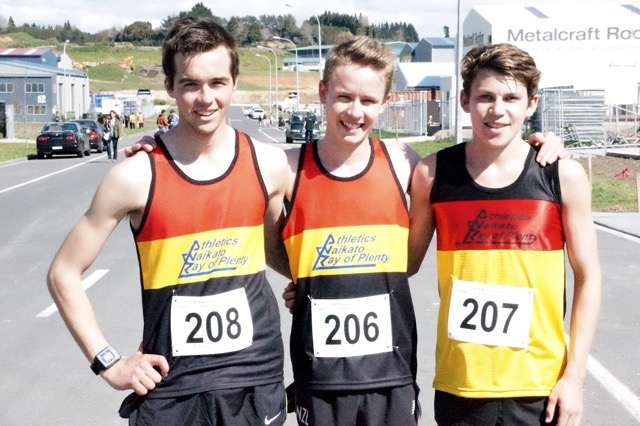 WBOP runners took the first two placings in the M20 race over 8kms. Michael Voss after a cautious first 3 laps made a break and won in 26.07 but Hawks’ Harry Ewing who had led the front bunch for the early part hung on well and had to produce an 800 metres type sprint to hold off Marcus Karamanolis Wellington by a mere second 26.16. to 26.17 to win silver. Matthew Scott was 11th in 28.09. 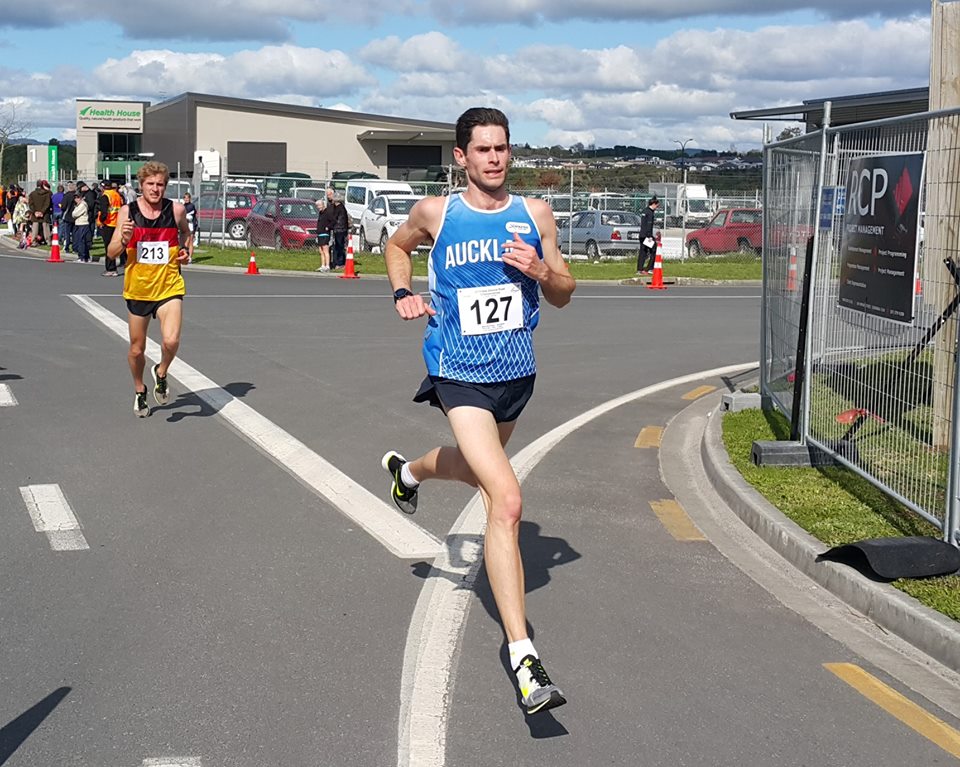 When a national champs is held on our home patch I was saddened by the small entry from all WBOP clubs.

In other news, the AIMS GAMES were held at Tauranga last week with the cross country on Sunday at Waipuna Park. At a quick glance Charli Miller (Fairfield Intermediate) picked up a second in her grade. A huge field took part, with 130 + in each race.

Saturday morning arrived dry but blustery in Cambridge. The forecast was for heavy rain in the Bay of Plenty, so as I drove over the Kaimais I was surprised to see no black clouds looming over the Tauriko estate.After finding the Waikato tent and selecting a singlet I set out with Maureen for a warm up run. The weather was fine with light winds, almost perfect conditions. All race distances were made up of a combination of small and large laps, throw in a couple of sneaky gradients and some head wind and there you have your course.With the ten minute call till start time we lined up in our teams, the smell of the sausage sizzle by the start line adding to my queasy pre-race stomach!  Finally we were off, two small laps and one large. Feeling pretty happy on lap one I was hopeful I would creep up the field from 5th place and latch onto Victoria Humphries from Wellington. However, my body had other plans and my race turned into a hard fought battle placing me 6th overall and 4th in my age group.  Bridget was close behind and took bronze in the 45-49 age group and then Maureen with a new PB of 19.47 and a silver in the 50-54 age group. Karyn was on her heels placing 5th in the 45-49 age group which gave us ladies representing the Waikato the bronze team medals.  Trish who has been plagued by injury these past couple of weeks put in a brave appearance but reluctantly called it a day half way round when the injury reared its head again.My favourite part of race day is throwing some extra clothes on and going for a warm down to cheer on the rest of the races. Trish and I checked out the Hawks form and yelled encouragement as the pained faces of the racers sped by. It was a great spectator course and top marks have to be awarded to the organisers.The Hawks put in some great performances with several podium places.In the Women under 18 Emerson Deverall was beaten to second by a mere 60 seconds to take silver and post an impressive time of 17.56. Talia Hogan took bronze in the womens under 20, while Jacob Priddey took silver in the mens under 20 race with Theunis Pieters coming 5th and Oliver Mclean taking 11th. Matthew Scott ran a great race and placed 9th in the mens under 18 race.  Isaiah Priddey winning the Boys Under 15 3km.In the Masters men John Crane continued his winning ways to take out his 50-54 age group. Kevin Knowles placed 4th in the 55-59 age group and Marc Scott 4th in the 45-49 age group.Tim Stewart had a hard fought battle in the senior mens race and placed 8th with only seconds separating the group from 4th place.Camille Buscomb defended her senior women’s title taking gold in a sharp 34.14. Emily Roughan took 6th in 37.42.And thanks to Mike Harris for catching the action on camera.

Click on photo below for slideshow and easier viewing,