This year produced fast times on a slightly shorter course (approximately 4.85km) due to road works.

What a stunning day for a hard run along the riverbank…Yet another great turnout for the Trophy Day club event – a handicap 5km race from the Museum at the top of Grantham st, across the bridge, down to Cobham Bridge, then return to the club on the western river path. You submit an estimate of your 5km time, and then when the countdown clock hits your time – you are off…

The plan if everyone is honest and realistic is for all runners to hit the finish line at the same time (tough job for the timekeepers!) – but as always there are those that run better/worse than expected and so it is spread out when we hit the finish line…

Trophy day (a view from the other side)

I’ve never run trophy day, last year I was in the UK and this year I am out injured. So I volunteered to do the timing with Glenn, thinking how hard can it be. Well apart from a tricky little spreadsheet, turns out not that bad.

What was hard was getting everyone to agree to their handicap.
Firstly – the mini competitions. “What time has that person put?” “I’ll go the same as so and so” There were claims of underselling and burgling.
Secondly – the changes of mind when everyone got talking out on the lawn before the race started. Vaughan Kestle gets the award for how many times he changed his estimated time.

Then up at the start line came the tactics…
Everyone started eyeing up who was going at the same or a similar time to them. Then came the thoughts that while someone might pull away they would slow slightly in the second half and the prospect of reeling them in or that some people are consistent and they can’t be able to get too far ahead or you won’t beat them.

And finally the smack talk, the trying to encroach on the start line to get a 5cm head start and the argy-bargy that came with that.

I can successfully say though that everyone got away at their allotted times and after that it was just the small task of recording everyone coming across the line. The bulk of the field finished within about a 2 mins of each other so for the most part, after all the too’ing and fro‘ing and the tactics, everyone’s estimates turned out to be pretty accurate.

A special shout out must go to Pat Gallagher for guessing his time spot on and to Peter Horan for being wrong by more than 5 minutes!

Results based on first to finish

Results based on Race Time

We started the day off sending out our 7 juniors first who all ran outstandingly all coming home in under 10 minutes. They all seemed to be holding themselves back for the easier 2 km specially as the had a 500 m hill to start of with. Right from the start Zarah Rattray looked strong and powered her way up the hill followed closely by Layton Mace and Zach Miller (may of paid the price for going a little hard to early). With Thea Mace, Charlie Giberson, Cory Brew and Amber Rattray all with in touching distance of each other nearing the turn around.

Zarah roared home coming down the hill to finish 1st followed closely by Layton, Zach managed to hold on for 3rd from a hard finishing Charlie.

On to the big race in which we had 42 runners race. This is a self handicap race so you needed to estimate your finishing time and when that time showed up on the starting clock you set off, making sure you didn’t come into fast as you may be disqualified by our timing guru Graham. Sorry to say this year we had 3 who came in just to fast and had to be Dq’d and I’m talking seconds here.

It was hard to see how the racing was going on in front of me as I was last to leave and having to be a hunter. Although I have to say it was awesome to get to the board walk and look down and see the number of runners flying down to the finish and thinking how many can I get which wasn’t many, sorry President for pipping you right at the line.

It was awesome to have 50 runners show up and race lets keep this up, but what was even more awesome to see was Brain Mayall (Club Patron) down supporting and bring his family along. Also having a lot of our life members either racing or watching was great.

I would really like to thank the marshal volunteers Mike,Wendy,Vaughan Swale, Graham, Ellie and Tanja really appreciate your helping hand sorry if I forgot anyone.

Good luck everyone who is racing this weekend the 25/26 May I will hopefully see some of you on the start line in Huntly Sunday.

Trophy Day went well, with 40 runners. It was nice to see Zane along to watch.
The handicap start had runners guessing their own finish times and setting off accordingly, making for a fast 5k finish.

After making the longest time-difference allowable 30 seconds it was clear half the field would have been disqualified so we went back to 60 seconds, as in previous years. 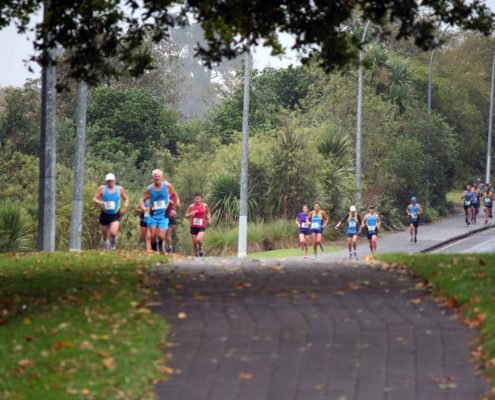 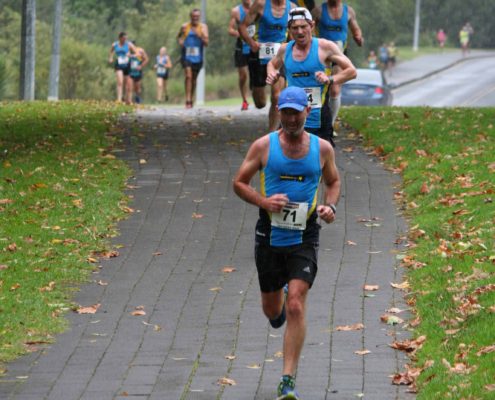 Trophy day is a handicap start, and is our traditional season opener.

Results from the day:

Very close race by these two

Despite it being not only the school holidays but also a long weekend there was a great turnout of around 60 people on a beautiful autumn day.

The first Club Race of the season saw a modest field of 27 compete over the traditional riverbank 5km course on Saturday. This was a self-handicapped event, with runners entering their own estimated times. The club clocks were all out on loan, but a bit of improvisation with a few iPhones managed to get everyone away at their selected start times.

First to the finish line was Gordon Speirs – back for his first race in goodness knows how long and not really sure if he was going to be running, hobbling or walking round. He managed to put in a good run … too good, excluding himself from the competition coming in more than 2 minutes ahead of his handicap. Fleur Marilier came in next to take the Cameron Cup for the first female on handicap. New member Dale Bull came in 10 seconds later to claim the Ready Cup. Then there was a deluge of runners … the next 21 runners coming through within just over a minute. Excellent time estimates from everyone (must be the summer 5km series helping with accuracy) … but not so good if you were trying to write down finishing order and times as a backup to the timing system (so glad it worked OK)!

Many thanks to all those who mucked in and helped setup, marshal and clean up afterwards.

A very pleasant morning turned to rain about an hour before the start of the first race. The weather plus other events may have contributed to numbers being down for the same event for previous years.

However, the rain eased off just in time for the first race, the combined 2km and 3km events for those 14 years and under (12 starters).

By the time the 5km started (33 starters), the weather had cleared up nicely even though there were a few thunder claps close by which kept us looking skyward.

This was a handicap event, so off we went at our staggered computer generated start times (that computer has no heart!) from outside the Bridgewater building, under the Bridge St bridge and up the grass past the bandstand (yuck/gasp) onto Victoria St and then making our way down the river path to Cobham Bridge and return.

All got back safely to enjoy a well deserved afternoon tea and bbq where there was plenty of good natured banter and a few lies shared.

Special thanks must go to Base Manager John Crane and his wonderful team of volunteers who all contributed to the smooth running of the day.

All Trophy Day winners and results are listed separately.