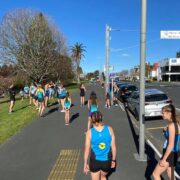 This year produced fast times on a slightly shorter course (approximately 4.85km) due to road works.

What a stunning day for a hard run along the riverbank…Yet another great turnout for the Trophy Day club event – a handicap 5km race from the Museum at the top of Grantham st, across the bridge, down to Cobham Bridge, then return to the club on the western river path. You submit an estimate of your 5km time, and then when the countdown clock hits your time – you are off…

The plan if everyone is honest and realistic is for all runners to hit the finish line at the same time (tough job for the timekeepers!) – but as always there are those that run better/worse than expected and so it is spread out when we hit the finish line…

Trophy day (a view from the other side)

I’ve never run trophy day, last year I was in the UK and this year I am out injured. So I volunteered to do the timing with Glenn, thinking how hard can it be. Well apart from a tricky little spreadsheet, turns out not that bad.

What was hard was getting everyone to agree to their handicap.
Firstly – the mini competitions. “What time has that person put?” “I’ll go the same as so and so” There were claims of underselling and burgling.
Secondly – the changes of mind when everyone got talking out on the lawn before the race started. Vaughan Kestle gets the award for how many times he changed his estimated time.

Then up at the start line came the tactics…
Everyone started eyeing up who was going at the same or a similar time to them. Then came the thoughts that while someone might pull away they would slow slightly in the second half and the prospect of reeling them in or that some people are consistent and they can’t be able to get too far ahead or you won’t beat them.

And finally the smack talk, the trying to encroach on the start line to get a 5cm head start and the argy-bargy that came with that.

I can successfully say though that everyone got away at their allotted times and after that it was just the small task of recording everyone coming across the line. The bulk of the field finished within about a 2 mins of each other so for the most part, after all the too’ing and fro‘ing and the tactics, everyone’s estimates turned out to be pretty accurate.

A special shout out must go to Pat Gallagher for guessing his time spot on and to Peter Horan for being wrong by more than 5 minutes!

Results based on first to finish

Results based on Race Time 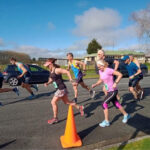 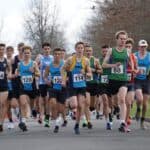