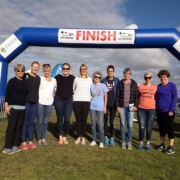 Last year it was Noosa, this year it was Whitianga, There were many similarities to the annual Hawkettes weekend away – beach, shops, wine and laughter – but first you had to race.

It’s not just road relays that have pre-weekend dramas.  Wendy H could not find her favourite running shorts.  The house was turned upside down and inside out, the fridge and washing machine were pulled out, draws were searched (they are now very tidy) but still they were not to be found.  The sunglasses she lost six months ago were.  Oh dear, the next best pair would have to do.

Friday afternoon/evening came and we were away.   Stopping in Tairua for a stretch of the legs was needed.  While waiting for the next car to arrive a shop was spied across the road.  Let’s look in there – that was it – shopping was commenced.  Purchases were made and off we went.

Our house was found. Very flash.  Thanks Wendy H for the e-mails to and fro to make sure we had everything covered.   Race numbers were then needed to be collected so off to the Whitianga Hotel for these.  All that can be said about this experience is that it took a while and perhaps they could have some lessons on how to sort a spreadsheet!

Dinner was pot luck and with race strategies sorted early to bed it was, and there were plenty of them – one each for all nine of us, together with three bathrooms and four toilets (essential for race morning!)

Race morning dawned bright and windless.  Pre-race rituals were attended to and then it was off down the road to the race start.  Only being 1.3km from the start line made it a short stroll with no parking worries.
Wendy H and Helen went down first.  The ½ marathon started at 9.00 with the 10km due to go at 9.20am.  Very much ladies hours but we coped with that!  Warm up went well and just prior to our start the rest of the group arrived.  Time for a photo (thanks Chris) and then we were away.  The first 5km was very chaotic.  Out 2.5km and then back 2.5km followed by two 8km laps.  Sounds simple but you were continually running into runners coming back towards you and the path was not very wide.  Then, the 10km started and you were then running into 10km runners who had to run out 1km, back 1km and then do one 8km lap.

Anyway, we managed to negotiate that and continue on our merry way.   The course was flat and fast and conclusive to fast times and there were enough people entered to be able to have someone around you the whole time you were out on the course.   One the second lap you were passing the 10km walkers so still had people in your sights the whole way.  Wendy (I’m never doing another one again) ran a controlled race to finish to run a PB just a shade over 2hrs.  Helen placed 10th women, 2nd in her age group and ran a time 3mins faster than last year.

The 10km had the balance of the Hawkettes taking part.  Their race started running into the ½ marathoners coming back towards them so was congested but this did not deter from their great runs.  After the disaster of last week’s Hawkes Bay 10km (poor organisation on the part of the organisers), Annette was looking to have a stress free, uncluttered run. 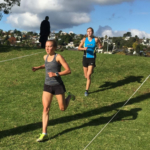 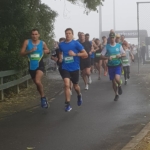