There was a small but enthusiastic turnout for the Bannister Plaque on Saturday, an event that was a late addition to the calendar for anyone who was around over the long weekend … and it turned out to be an enjoyable and sunny Hamilton afternoon for the 22 runners who came along.

Helen Hall-King had come up with a great idea for a different relay format, so we gave it a go. The format was based on teams of two (so we had eleven teams in total), and the course was our Cobham Drive cross country course, with a 2km lap and a 1km lap marked out. Each team had to run two 1km legs and two 2km legs, and the teams could decide for themselves how they split these between them and in what order they ran them in. The only rule was that the same runner couldn’t do consecutive legs (so they had to alternate). That kept things interesting right to the end as some had chosen to do the short legs first and get ahead, others ran the two longer legs first, and some just alternated between the two – so it wasn’t until the last few hundred metres that things unfolded.

First over the line and Bannister Plaque winners was the team of Gemma Horan & Andrew Wark. Second was the team of Vaughan Kestle and a fast-finishing Les Miller, just outsprinting the third placed team of Mary Rogerson and John Crane.

Many thanks to all the helpers who pitched in on the day. 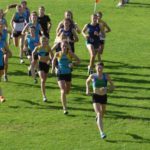