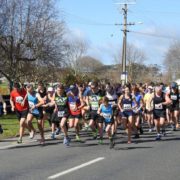 Cambridge Half Marathon and associated races proved quite popular with Hawks members on Sunday. In the field of 473 finishers over 30 club members took part. Based on Cambridge High School the day was dull, overcast and quite windy which provided a challenge for those racing for PB’s.

Russ Best raced a hard 5km and looked quite sharp to record 15.54 and set a new course record for senior men  by 41 seconds and win well. Emerson Deverell ran a controlled 5km to win the women’s race in 18.17. Both will benefit from this race as they prepare for nationals next weekend.

Lance Brew was second to finish in the half marathon in 1.18.12 behind new Cambridge resident John McKee who clocked 1.14.11 to win. Kevin Knowles 1.27.42, Kovo MacDonald 1.31.24 first senior women were other club members noted in the half.

It was a real running day out for the Montgomery family as beside the three boys mum was noted among the 10km finishers as well. Great effort. There were many other Hawks who ran but it was quite a mission to note all and their time. Apologies for that. Those who took part all helped their preparation towards the national road relay with another race experience. 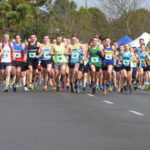 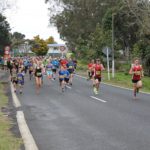 Whangamata Half 2017 Results
Scroll to top