We always knew it was going to be a great weekend.  The weather prediction was for fine clear skies with little wind, and Mother Nature didn’t disappoint.

3 Hawks affiliated teams and one soloist had braved this event.  Kovo’s all woman multisport team in the 3 person event, Dot & Chris in the 2 person Duathlon, and Kay, Karen and Jackie the only woman team in the 3 person Duathlon event. Hoogie was our only brave (mad?) solo multisporter.The hardy m’bikers lined up at the Thames racecourse for a 7am start on Saturday morning, shivering and battling a hard frost.  The first leg was a 20km m’bike up the Kauaeranga valley, which sounds easy enough, but by the time we completed it, many were suffering near frostbite in their toes and fingers!  The first transition saw the runners heading off for a 27km run up and up, past the Pinnacles past the summit and over the other side to Coroglen.  Dot Larsen, Kovo, Jackie and Hoogie headed off on this (normal 2 day tramp) to tackle the elements, including several stream crossings, and “mountain goat like tracks” while the rest of us  headed off in comfort by vehicle with heaters to the transition point at the Coroglen Tavern.Kovo was the first woman into transition having deflated several male egos on the way, overhearing comments such as “sh*t , I’ve just been chicked” as she flew passed them.  Kay, Hoogie and Dot also had great runs over this rough course and like most “real” runners enjoyed the last 9km of track that was actually runnable. At this point the multisporters headed off in their kayaks to Cooks Beach and the duathloners jumped onto the bikes heading to Tairua (including an out and back loop into Cooks Beach to check in at checkpoint 3).  Multisporters completed the 4th leg of their day on the road bike into Tairua, with all cyclists having to tackle the infamous “Pumpkin Hill” 6km climb before dropping down into Tairua to complete day 1.At the completion of the day, Kovo’s team was sitting in 2 place overall, 30 min behind the 4 person all male leaders, which happened to include a veteran Hawk member – Dennis Litt.  However, the m’biker in Dennis’s team had committed an indiscretion on the bike, so just to make things interesting the organisers gave that team a 30min penalty, which put Kovo’s all woman team 1 min ahead heading into day 2.The 8am start in Tairua wasn’t half as chilly as the day before with the Kayakers heading off up the Tairua river to Hikuai.  The Duathlon cyclists started at 8:30 for the 40km ride across to Whangamata.  Because bikes tend to go faster than Kayaks, Chris and Karen entered transition at Whangamata considerably ahead of Shanel and Hoogie which saw Dot and Jackie heading off on their 21km run up Wentworth Valley and onto the Maratoto Track between Paeroa and Thames.   Again, several sets of wet feet and mud puddles challenged the runners in this section.  They all seemed pretty pleased to reach transition and hand back the timing chip to the cyclists.  The helpful southerly breeze saw some pretty tidy times with the cyclists whizzing their way back into Thames for the final leg of the event.  Karen crossed the line, closely followed by Chris, with Shanel and Hoogie completing the line up shortly after.A great weekend was had by all.  Kovo’s team ended up 2 overall, being overtaken again in day 2 but ending up the winning 3 person team in the multisport event – a very significant achievement. Quick beer and food stop at the Kopu Tavern on the way home – a great finish to a great weekend.

Report by Chris and Dot 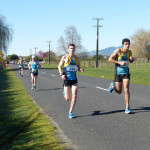 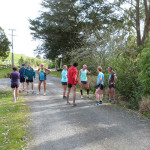