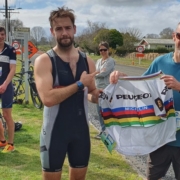 I was nervous about the idea of taking part in the Dudfield Duathlon, due to traumatic memories of being pulverised on the bike leg by actual cyclists when attempting such things. However, it’s a classic event, possibly in its final year of this format, considering the Peacockes Rd development. So I put on my big-girl shoes and threw the mountain bike in the car.

A small but enthusiastic crew gathered at the Dudfield’s, christened by a short sharp shower of rain en route to the start. There was no small amount of smack talk amongst the frontrunners vying for the world champ jersey. I just tried to work out how to make my watch record something other than ‘run’. Everyone set off on a new keyhole run course down through the trees, except Harry who initially headed off towards Graham’s (and I apparently swum 300m instead, if you ask Strava). This 2.5k course was an interesting variation to the previous flat one, and quite the lungbuster.  Pace was hot at the front and they’d disappeared by the time I hit the bike leg.

At 9k, this was a nice doable distance even for those of us without clip pedals or road bikes. My cursory map glance indicated we stayed on Peacockes Rd for this leg – easy! So when Iain gestured questioningly down the Peacockes Rd that turned off Peacockes Rd, we both had a wee detour, but were soon called back on track. After some nice rolling hills heading towards the turn cone, our small group saw Chloe coming back in the lead and marvelled at her bike prowess in coming past the speedy guys’ pack. Wait, where are all those speedy guys? Giving us a handicap catch-up chance perhaps – how generous. As we headed back, this pack trickled past slightly abashed having missed the cone and added a few extra kms for good measure. Although possibly Vaughan added more, after heading out alone for a lap 2 on the bike – keen.

The good part of all this was pulling the field back together a bit for the last few kilometres and improving the spectacle for the mid-pack. Legs were predictably dead on the second run leg, but it was fun to push through and try something new. My nervousness was unfounded – this was a fun relaxed event all round. Congratulations to champs Mike and Chloe, and big thanks to Graham and Lorraine for hosting us all. 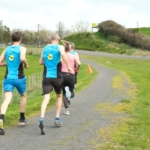