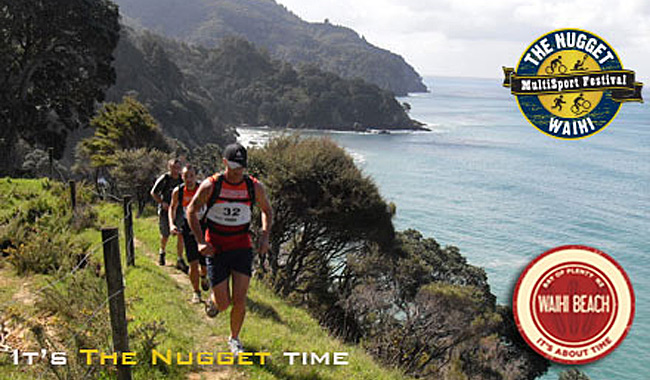 Waihi and Waihi Beach in the southern Coromandel are the impressive setting for the spectacular Nugget Multisport Festival.

You’ll take an unforgettable adventure from Waihi’s charming town centre out to the spectacular harbour and coast at Waihi Beach, before returning via breathtaking trails to the rim of the mighty Martha Mine and our iconic finish line under the shadow of the Cornish Pumphouse in central Waihi.

This event offers a deal for six people entering together, says director Mark Samson. “Starting on beautiful Waihi Beach, near Coronation Park, you’ll head north along the sparkling white sand for about 1km before heading up the first climb and on to the famous undulating single track. You¹ll run under the pohutukawa canopy and through the nikau groves on the Orokawa and Homunga tracks as the trail carves its way north along the rocky coastline to Homunga Bay, before climbing west to Ngatitangata Road, Golden Valley. This section of the run is stunning!
Passing through the aid station, you’ll head straight into some farmland, down a big hill and along a couple of cattle races, and even through a milking shed. New track will now link you through a friendly local’s farm, across a small stream, through an underpass and down through more lush dairy land. There’s another creek crossing, some small climbs and a drink station before you’re back urban.Then it’s quickly back into the bush and through some cool gold-mining heritage features on Union Hill, across the road, to end with a short blast around part of the Martha Mine Pit Rim Walkway, and the finish line under the shadow of Waihi’s historic Cornish Pumphouse. Gold.” 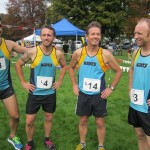