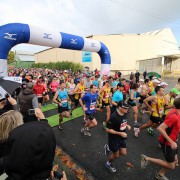 Alex Parlane led a lonely path around the Huntly half marathon course, winning as he liked in 1h 12m 38s. The former national cross country champion clocked a personal best in the windy conditions finishing a minute ahead of his Wesley Club team mate Tom Moyes. Tom Hunt was third in 1h 15m 38s.

The first three runners went the correct 21.1km course but from fourth to eightieth veered off course around the 7km mark and in most cases ran an extra 2km. Lisa Robertson was one of these, but still came through to win the women’s section by five minutes over Esther Keown with a further two minutes to Fiona Love.

I made it to the start line in a general good working state and positioned myself a couple rows back amongst other Hawks.  My plan was to do 4:05 minute kms with some extra allowance for the hills. I managed to not get carried away by going too fast over the first 5 kms and kept Kevin, Paul and Kovo in sight. Did a good pace over the first hill or two and came up alongside them, we started commentating how we didn’t remember the additional hills before the lake and begun to wonder why we weren’t advised of a course change.  It seemed logical to follow the way others were going, especially as there was an abundance of traffic management cones in the middle of the road continuing off into the distance. As we neared the top of a steep hill Kevin and I were greeted by around 20 runners coming towards us like a herd of bulls – most with their nostrils flaring too. Confusion set in as we joined the downhill onslaught to find the road that would lead us on to the lake path. As others were also heading the wrong way they joined us creating a snow ball effect of runners searching for some sense of this half marathon they came to conquer.

The lake path ended up being like rush hour in Auckland’s Queen Street and it was difficult knowing who was going at your pace and how to gain your stride back. I avoided thinking too much about the km markers as I had done close to 2 kms more.  Once I got back on the road I settled into a better stride and felt comfortable running at a good pace up and over the long hill and after a few more dips in the road managed to catch up with Kovo. I enjoyed having Kovo to run with past the quarry and to the most northern point in the course, where we turned around and were greeted with a strong head wind.  Kovo made some attempt to shelter behind me from the wind and quickly realised that my lean frame provided little benefit.  At the 21km mark I hit my target of around 1:26:30 but unfortunately due to the detour still had 2km to go so stopped looking at my watch and ran how I felt – which I thought was a similar 4.05 pace but later discovered my pace had slowed and the last 2km was a tough slog to the end.  With 300 metres to go I ran past Wendy who was yelling at me that Kevin was right behind me and I needed to pick it up so he didn’t beat me.  I tried to pick up the pace and was rewarded with excruciating cramp in my leg which stopped me in my tracks and Kevin went flying past me.  This was enough to force myself to get going again and caught Kevin on the grass who of course sprinted off and beat me by 3 seconds.  Despite the frustration of the extra distance and not truly knowing what my 21.1km time would have been I really enjoyed my day and felt that my race went to plan and I kept a fairly consistent pace throughout.

Look forward to doing it again next year.

This is my first Huntly half marathon and I was really excited but
also a little nervous due to various accounts of how many hills there were. The weather looked dodgy but oh well – how hard could it be?

It always takes me a good hour to warm up so by the time I had reached the 10k mark I was starting to feel more relaxed. I really liked this course. No real hills that were taxing and a bit of variety. The out and backs helped me see the people I was trying to catch and pass. Even the strong head wind helped cool me down. This a course I would definitely revisit and hopefully I will be faster next year too.
2km race report by Sophie Harris

I set off about 20 people behind the first runner. The grass was squishy from the recent rain. My shoes slid on the wet and it soaked into my shoes. I ran past a playground full of laughing toddlers splashing in the puddles that had formed on the tarmac. I followed the path forward, almost missing a hidden corner. Mushy grass gave way to slippery concrete and I spotted Haylee ahead of me and I suddenly had a burst of energy. I slipped past her and carried on with growing adrenaline. I charged down the hill and with tired reluctance I carried on around the course once more.

I had run myself hard and also exhausted myself but I earned myself a new PB of nine minutes and twenty seconds. 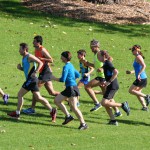 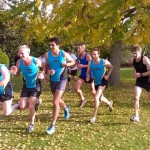