Kovo got instructions to sort a SW team. Easy! Not really. But we got a team and even had a driver volunteer to drive us – he had no idea what he was getting himself into (thanks John). 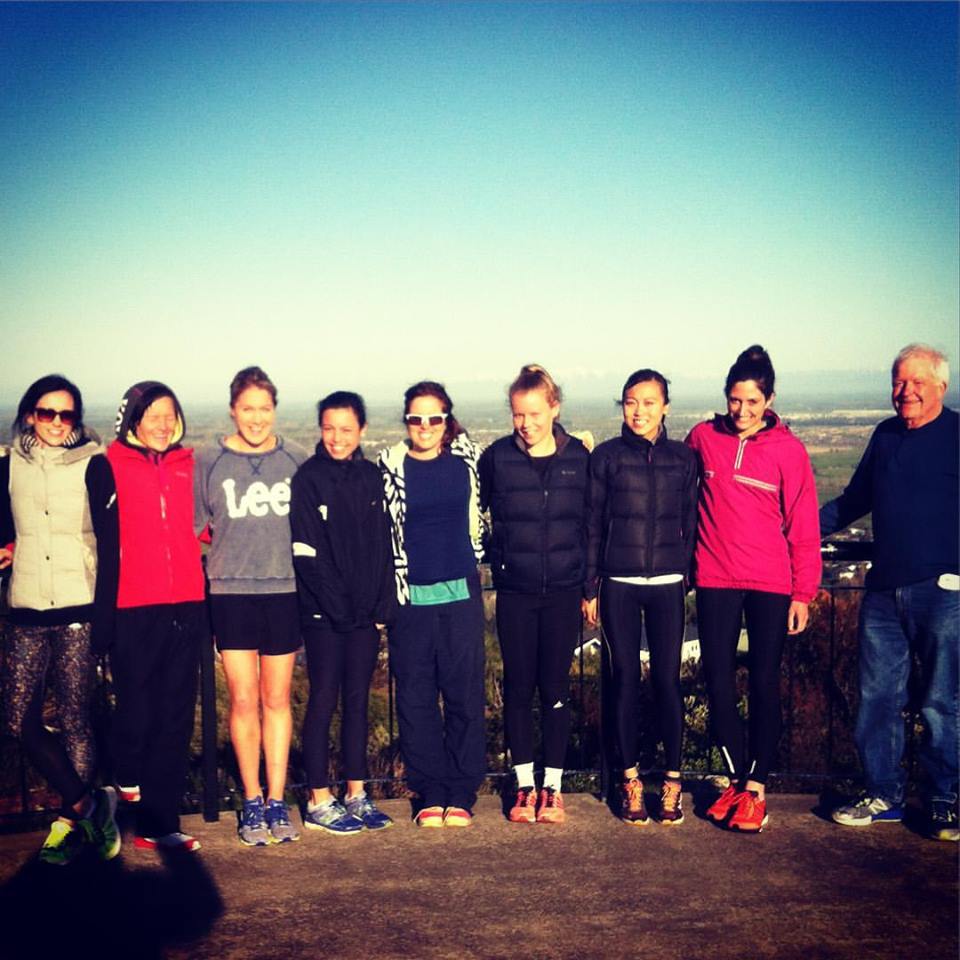 The overall day was superb. 8 girls. One John. One van. Lots of food. And a team full of 50+ “old men” to chase. Sarah ran a superb first leg which was not an easy one with a winding uphill section followed by a undulating track. Thanks to strong uphill and speedy downhill running she managed to finish her leg as second senior woman (third fastest SW time overall). Nancy was second with a tough leg – but with an untied shoe lace the whole time.

She still managed she cruise to the finish to hand the baton onto Maddy Brunton, who ran an exceptional leg. This was a 10km flat leg starting at Gebbies Valley and finishing at the Ataahua Domain. Maddy ran strongly and was able to have runners in her sights to be able to stick with and to pass. A delight to hang out with for the day too. 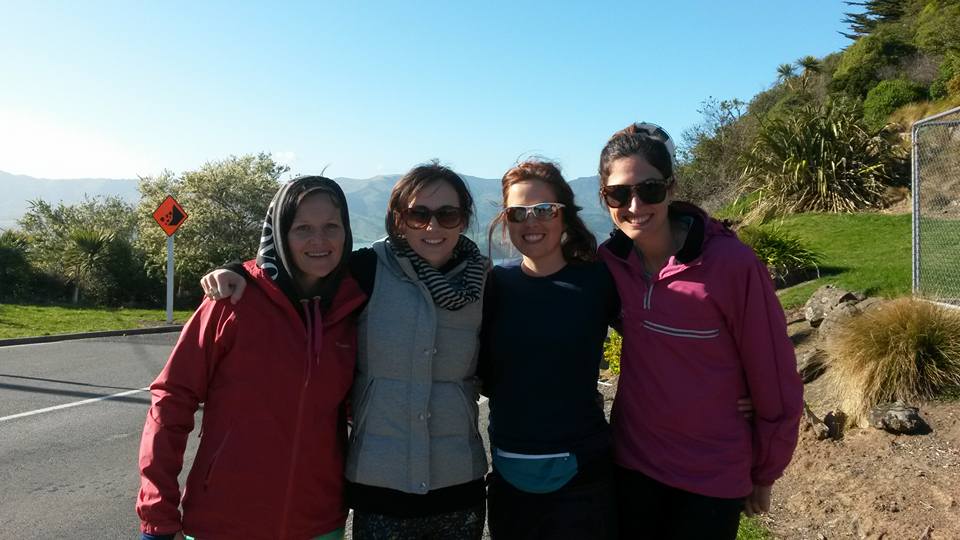 Although a slightly shorter leg, Hannah’s leg was by no means easy! But she stepped up to the challenge and ran so well that she was voted by the team later as Most Valuable Player. And she really was! Having never raced this far before, she made it look easy, and she looked so strong the entire run! Running into a head wind, she pushed on surprising everyone with how fast she arrived at the finish! So much so that Veronika never did make that last minute toilet stop.

Veronika, although a known sprinter, was given the longest leg and absolutely nailed it. She was told to treat it like a rep training session- only this time she had 55x 200 reps with no breaks. She took it in her stride making 10.7k look easy, handing over for the hill leg to Malesa. She may be petite but boy this kid can eat – every time you looked at her she had a mouthful of sugar. Although nervous she was prepared – she was on a sugar high to bust up the hill in 38 mins (faster than the “old man she was chasing”). 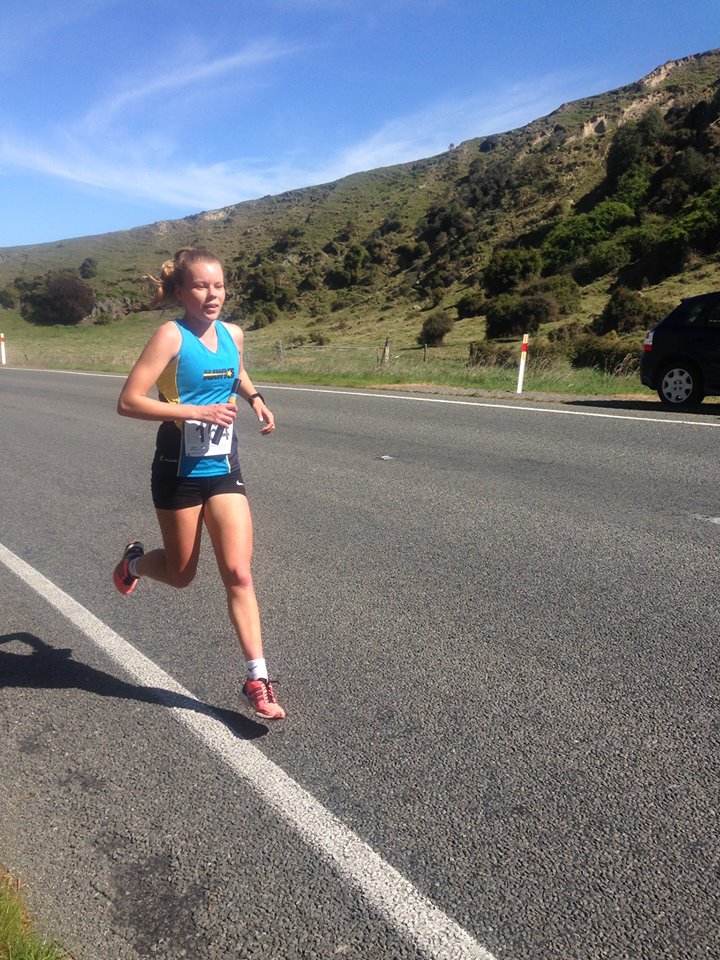 Next up was Kovo. She’d seen the previous senior women’s team come in and was timing the gap, so that she knew how much time she had to make up to pass them. (We may not have been gunning for a medal, but any goal’s a good goal, right Kovo!) Malesa came into transition and Kovo was off! She had 6 mins 15 seconds to make up – if anyone can do it Kovo can. The surprise on many peoples faces as this tattooed, female, flying machine came bounding up behind them and passed them in the blink of any eye would have been priceless. She must have flown down that hill because she made up the 6.15 and more. What an amazing run! She was the fastest senior women of the day on that leg, and just 20th overall.

The cool calm collective experienced head brought us to our last runner of the day – Shanel. All day Shanel had supported and witnessed seven runners hit highs and lows before being handed the baton to take us to the finish. It was a very consistent steady run. Shanel took the massive hill and destroyed it, taking us over the line in a total time of 5hrs 31 and something seconds – and still smiling!

A massive high fives to the girls who put their hands up to make this possible and represent the Hawks for the last year (for a while) in ChCh. A bigger high five to John T for all his advice, support, effort, energy and wise calm words throughout the day. You had it harder than us girls! And now you know what we mean when we say we Need! To! Eat. All. The. Time!

I was privileged to be able to attend this year’s NRR as assistant Team Manager and driver for the Open C team, and it did not disappoint.  The trip down to Christchurch was relatively uneventful, only a quick turnaround for a certain President’s forgotten wallet, a dodgy-stomached MM and a rather bumpy plane ride to dampen the spirits of this year’s Hawks NRR teams who were ready and raring to go.

Along with John Tylden, I attended the Manager’s meeting on Friday night to make a whole raft of changes to our ever evolving teams – would John B’s stomach recover? Which team would win the fight over Dion, who was the least injured in the MW team, and get the hardest lap? After receiving extremely extensive and mind-numbing traffic management instructions and warnings, John T and I headed back to the Hawks team briefing to give them all their packs, pass on the warnings and wish everyone all the best for the next day. 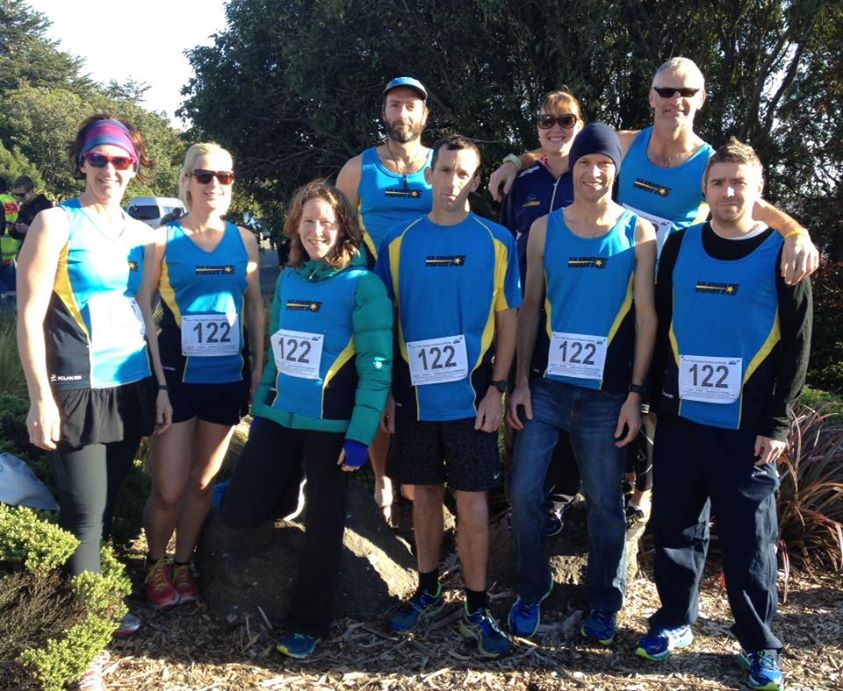 Saturday dawned bright and clear and the Open C team decided to head off early to see the other Hawks teams start, as we were one of the later start times.  It was great to see the blue and yellow singlets standing out amongst the other clubs and to cheer our fellow members as they started off on the first of many steep hills to be faced by different runners throughout the day.

At 9.45am Ellie stood at the start of lap one ready to start the Open C team off.  She did us proud with a strong effort up a 4km long hill and then powered down the other side to pass the baton to Mike who despite some pre-race butt niggles ran an awesome second lap to bridge the gap between us and the team from Sumner and the Canterbury Tri Club.  Gary Clare (a newbie to NRR) did us proud as he stayed within striking distance on one of the long flat hot and windy laps of the day. Clare M (NRR newbie) ran an amazing lap, swallowed a few flying insects along the way, and was two minutes faster than her predicted lap time.  Little did we know at this point that we were about to start an epic battle of who would be the last team home (not the slowest team of the day as everyone had different start times) and the honour of being stalked by the traffic management team as they packed up behind us.

The baton was passed to Orlaith (NRR newbie) who powered away to close a six minute gap between us and the next team and put us into a good position of a minute ahead for Ross Barnett who was to take on the mother of all hills.  Ross (NRR newbie) had been on the reserve list stating that if we were really desperate and had no other options then he would join the team.  Well, Tuesday night the week of leaving things got desperate and Ross came to the party – little did he know that the hill lap was so evil.  As we kept on driving up that hill, Ross kept on running and running and running, never giving up and handed the baton to Michael H who was amped and ready to battle it out with the Canterbury Tri Club on the big downhill lap.

At the last transition point Sumner headed off with Canterbury Tri Club 9 minutes behind them and Hawks another 2 minutes behind. All was to change though on the last lap with Grant B running for his life behind a very fit and young tri club member.  Little by little they closed the gap on Sumner and with 3 km to go Grant closed the 11 minute gap and passed the Sumner runner.

After checking the results, we found our overall time was only 30 seconds behind the Hawks MW team and we had several of our team who had run faster times than anticipated.  It was an awesome day of great team work, camaraderie, gutsing it out when there was no more to give, and great support.  Thanks Open C team for making my first NRR experience such an awesome one.  I can’t wait till next year – hopefully I might even be able to run! 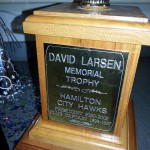 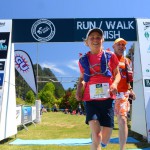