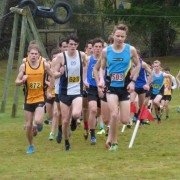 As always the event was run superbly by the Taupo Harrier Club. Excellently marked and records kept as races run on same course each year. Event first run as a nationals race in 1987 as a trial for World CCC at Ellerslie race course where the NZ team was managed by myself.

Quite excellent running conditions this year under light rain cool but no wind. I was delighted that 27 Hawks took up the cross country challenge as it was always my most enjoyed part of the sport. Chuffed to see Hawks win five firsts, four seconds and two thirds.  As a mudlark from way back I was a little disappointed that more club members don’t try this event as it is clearly NZ’’s best course.

Once again the Hawks tent spot gave us all a good view of races and to be serenaded by bell birds and tuis in the banksia in front of us as we watched the hard fought racing made it a bit special for me.

It was a day for the strong as the Spa Park course is very challenging and a number who didn’t yet have a big training base found out as their races progressed. In the Masters Men’s grades Hawks showed out. Steve Rees-Jones a week old kiwi resident (gained residency earlier in the week) led from the start. He ran within himself and lapped twice at even pace going out to a longer lead  as the race progressed to win very comfortably in a course record 20.22 taking 12 seconds off Todd Stevens (Scottish) record. John Bowe enjoying his retirement from full time dairying was 6th in 21.45. In the same race Glenn Sexton ran cagily but well to be 3rd M45. John Crane was defending his M50 title from last year and led early but had to run within himself in the later stages as the hard course wore him down and he was passed by a Auckland runner. John was a close second as we all witnessed but came out in the official results as first in 22.21. We will claim that as passionate Hawks. Not far back in the same race were Kevin Knowles 6th M55 and John Rudge 2nd MM60 and David Trow also second in MM70

Among the younger grades we also had success with Emerson Deverell winning the W18 race with a very determined run and picking up $100 which will help towards her trip to the Australian CCC in late August in Melbourne in the NZ secondary schools team. There was an excellence Hawks presence in this race with Grace Ritchie 4th and Jesse Speedie 6th. Harry Ewing was second in the M20 race while Charli Miller placed third in her G14

In the Masters Women Bridget Deverell made it a family double win with a determined run to take out the MW45 grade while Maureen Leonard was six seconds further back for 2nd in the MW50.

The most pleasing win of the day was to see new Hawks member and now Cambridge resident Alice Mason take out the coveted women’s title with a front running display. Crowned national marathon titleholder a few weeks ago in Christchurch Alice is revelling in training on Cambridge lake tracks and riverside trails. She went straight to the lead from the gun and was able to maintain her early lead in a confident manner. Her first win in Hawks colours.

All in all a great days winter racing. 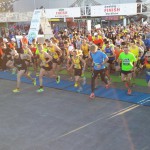