A field of 25 lined up in the School of O held at the lake course.Up for grabs was the Gichrist Rosebowl trophy and the glory of being named top school.  After heated discussion whether Fraser, Fairfield or Melville were the best schools in town we set off. We settled on 7 teams with Dave Southwick and Lance Brew going into the draft and running for Fairfield and the Blues.  Dawn was a dilemma being the only correspondence school student so Trish tried buying  her Fairfield allegiance with a fancy singlet but Dawn ended up in the Chiefs franchise. The Taranaki team of Kevin K, Dot L, Fleur M and Bridget M broke away from the Chiefs, possibly causing a future rift if Rugby NZ catches wind of it.  A final second Melville call by Marc Scott signaled the start, the women doing 4km, the men 5km.

Up front it was tactical race with Kent, John Crane and myself trading leads until John broke away with 600 metres to go. Kent chased hard but couldn’t catch and I fell back to 3rd. In the womens race Dawn had the win with Charli Miller close behind and Helen Hall King coming in 3rd. Top female in the age grade stakes was Maureen Leonard and top male was the newly minted 50 year old John Crane. Winner of the Gichrist Rosebowl and School of Origin was Hillcrest with Sunil, Helen and Kent all very consistent.

The kids did a 2x 1km loop around the lower part of the park near the old train station. Lucy Farrell took the win from Donovan Farrell and Josh McLaughlin.Thanks to Judy for timing and the after match function, Brian Mayall for the photos, Tanja Miller for the expert get set go and Andrew W for the speeches.

Editors note: Thanks again to Glenn and Andrew for setting up the course. 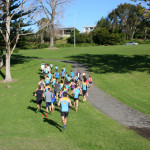 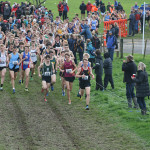