A modest but august group of Hawks ran the Sing Relay on Saturday under glorious blue winter skies.  The format was the Helen Hall-King inspired method. The attendees were organised into ranking order. Teams of two were picked from the front and back of the line, meaning roughly even teams.

All began together, the faster runners turned at the 2.5 k mark, but upon meeting their team member , turned again in pursuit of the 2.5 k mark before heading for home, while the slower team member turned for home upon the first meeting of their faster team member. Did you get that? It’s a good no fuss, easy to organise format. The winners are the first team with both runners over the line.

The best teams were:

Thanks Helen Hall King as chief organiser and Wendy Harris who organised the kids pack run. Specials thanks also, to Brendon McLaughlin for this weeks photos, Andrew Hall for being the turning point Marshall, Kent Hodgson for lead bike duty and Judy Chandler for taking care of the afternoon tea.

On a historical note, Bruce Sing ran in the club for several season post WWII. 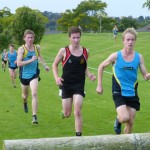 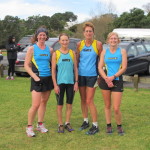