A modest but keen bunch of 18 turned up to the Sing Relay on Saturday. With the recent river floods there was doubt to which course we would use, but the levels dropped remarkably in the 24 hours leading up so we could use the usual out-and-back with a modified start.

17 runners listened to the race instructions, and those 17 didn’t get lost… however 1 unlucky runner (who was leading) ran past the turnaround cones with four words ringing in his ears, “Take two left turns”. Unbeknownst to Jai, the left turns were junctions on the riverpath before the turnaround – not left into Peacockes Road (and anyone’s guess where the 2nd one was.) End result was, Terry got an extra bit of distance in waiting to meet Jai on his way back. Terry turned around and waited for his buddy for 5 or so minutes while he took a tour of rural Peacocks Road.

Winners on the day were Fleur and Russ, followed by Emily and Kevin, and Mary and Glenn.

Big thanks to Cameron Hall, Kevin Knowles and Kris Moore for organising the day.

After a wet week and some hard work completed by some young men to sandbag the entrance to the clubrooms, Saturday was a beautiful day.
They were all off with Cameron’s loud call of ‘Go’, heading towards Cobham bridge.  The faster runner of the pair, runner 1, was required to run to the turnaround point 2.5km out from the start line then head back towards runner 2. Once they reached runner 2, a baton, in this case a small piece of Styrofoam, was handed over and runner 1 had to head back to the turnaround. Runner 2, in the meantime would head back to the start line.

Jai lead the pack from the get go, heading out with his competitive mind, followed closely by Kris and the rest of the group. Jai was in such a competitive mind that he carried on, carried on past the turnaround cones, adding an extra 3kms. As Kris followed and yelled at Jai to come back, Jai’s competitive mind continued forward. Kris, not wanting to let his team mate down, gave up and continued with the race. Everyone else was on track.  As they headed back to the finish line, runner 2 waited for runner 1 to ensure they crossed the finish line together.
First place was taken out by Rob and Fleur in a time of 21.16, followed by Kevin and Emily in 22.14, with Glenn and Mary in a time of 22.27 taking out third place.

Results are as follows:
Rob and Fleur
Kevin and Emily
Glenn and Mary
Kris and Gilbert
Dawn and Evan
David and Kai
Sandra and Craig
Gordon and Garry
Jai and Terry 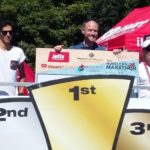 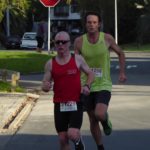