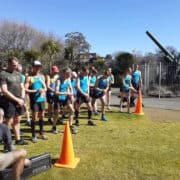 It started out like any other sunny Saturday afternoon.

Although the entry numbers were down, our spirits were not, and with only 17 adult runners one dog and 2 kids it was going to be a small field full of quality runners.

With myself wrongfully thrown into fastest runner position I teamed up with the ever reliable Gilbert McDonald, after a few misunderstandings between the two of us about the turnaround and the baton change rules we soon figured it out and took the start line…… although momentarily held up by the fact I had a horse race to watch in the closing seconds of the start countdown (thank you all for your patience and no it wasn’t a winner)

All 8 teams took the start line plus Mark Scott and his k9 companion Max, as usual Rob went like a cut cat from the outset and set a torrid pace, soon to be caught be me and later by the many Margueritas he slurped back the night before.

At the turn around I lead narrowly from Rob followed by a mass group chasing us down, Rob turned earlier than I and after that I barely saw another soul and my pace dropped dramatically till I sighted Gilbert who was dawdling towards the finish line waiting for me to catch up, when I yelled out I was approaching he sprinted that fast I couldn’t even get near him (man’s got a good turn of foot)

The victory went to Mark Cornaga and Paul Ewart narrowly over Mark Scott and Max.
With just over 2.1/2 minutes covering the whole field over the finish it was a very even and brilliantly organised race thanks to Dave Gunn and co.

[Foot note – the two running the kids race seemed to have an absolute blast as apparent in the great finish line photo! Fantastic seeing young ones enjoying themselves…]

And a different perspective from Dawn…

Sing Relay coincided with a gorgeous Saturday as a keen gang of Hawks congregated in Memorial Park. This one has a fun format – teams of two head out on an out-and-back, with the slower person carrying a baton. The faster runner turns at the turnaround, takes the baton from their teammate when they meet them, and heads back once more to the turn, while the other runner can head back. The aim is for both runners to cross the line together, in as fast a time as they can collectively muster. Cue the always-fun line-up from (alleged) slowest to fastest, where there was a lot of this: 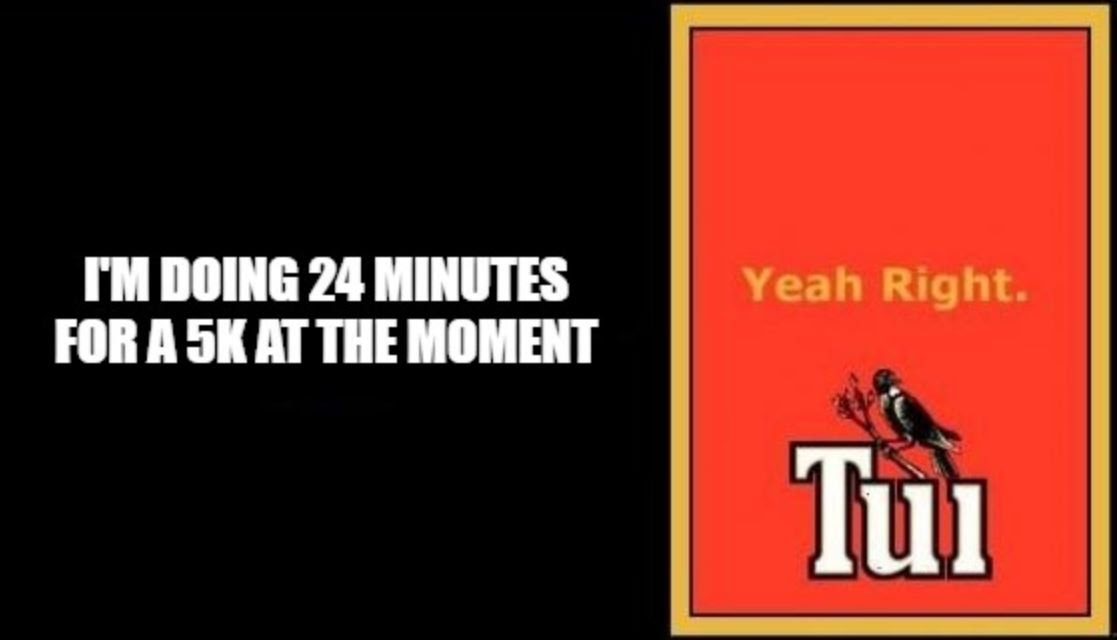 Marc was the odd person out, so got paired with his dog Max. Was this a bold burglary attempt? Time would tell.  Everyone sped off optimistically. I was paired with Kirsten, kept her mostly in sight while puffing behind, and changed baton around the top of the last uphill. We appeared to be in a good position, so I didn’t get to relax as much as I fancied, in case she appeared behind me too early. I caught Marc and Max, and contemplated throwing a stick for canine distraction but it would have taken too much effort. Paul zipped by in a strong (non-24-minute-5k) pace, having handed over his baton to Mark C. Ultimately this strong duo would take it out, from Mark and Max who had a woofing good end rally, and Kirsten and I followed.

Great storytelling Dawn!
There was reportedly only 2.5 minutes or so between all teams, so well done to everyone, and thanks to Dave and helpers for setting it up. Marc produced some refreshing homebrew, some Hawks had a beverage at the Eastside, and a good time was had by all. 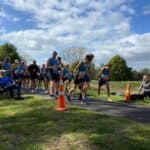