I had no idea, really.

No idea of the terrain, no idea of the route, no idea how to adjust my borrowed race pack and no idea whether my obligatory pre-race injury would actually allow me to start, let alone finish.

I didn’t even know we were supposed to bring sheets and towels to the Book-a-Bach (thanks Kevin).

What I did know was that this was a trail marathon, and there would be a good party afterwards.

And about 25km into T42, that was still all that mattered. Things were pretty sweet. Lots of downhill. Lots of bush and trees and valley. A few stream crossings. Birds singing. 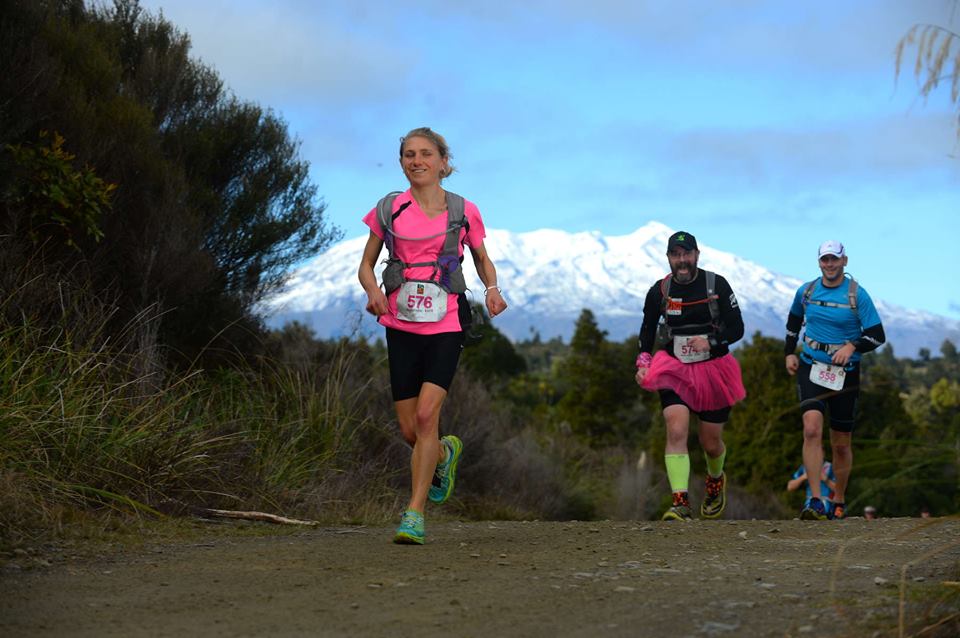 And, hills. Near-vertical hills. Lots of sludgy brown clay; deceptively firm until you landed and saw your feet take off in petrifying directions. And a motionless mountain biker, bleeding from the head, being carried off on a stretcher.

The 15km-to-go sign appeared just as I was getting uncomfortable. Great, it’s just around the corner!

Some hundred kilometres later, I was still running. I had passed some folk, so at least I knew I was still on the right trail. But it kept going.  Where was the bloody end? My guts were a churning mess of coloured sugar, my strained groin muscles were screaming, my pack had claimed several epidermal layers and I really, really wanted a burger. Or a beer. 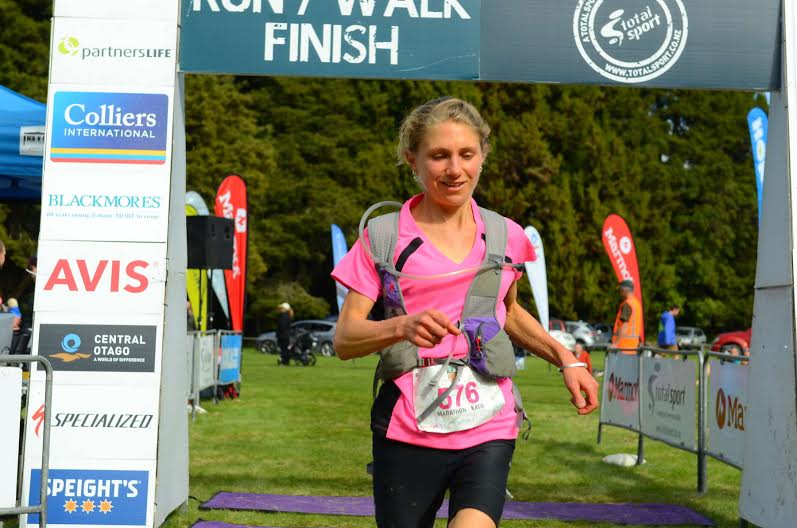 I owe my final ounce of strength to Black Cherry Chomps (free in our goody bag), which allowed me to drag my moaning butt up the not-quite final hill. And, a billion years later, over the finish line in a time of 3.43 and third woman overall. To a burger and a beer and a zip-lock bag of ice cubes to shove down my shorts.

Hawks did a good job of cleaning up the top spots, with the amazing Katy Dawson finishing in fourth place overall and second woman. Kevin Knowles sneakily jumped into the 60+ age group for the day to claim first in his age group (??) and fifth overall. Spectacular running in the 24km as well, with Glenn Sexton taking out first place overall, Hooge third, and Orlaith Heron 8th (and second woman). Lisa Joblin, Ellie Broadbridge and Shona Dewson also ran brilliantly in the 24km, which was apparently even tougher than the marathon itself.

Oh, and the party. What a party. One to remember (if slightly hazy). And absolutely worth the bumps, bruises and burning muscles.

As the cliche goes ‘what happens on tour..’ – so here’s the edited version of T42 events.

It was a pretty epic weekend! Weather was perfect and the 24km (plus some) was in good condition instead of the renowned mud bath. The markers went a bit astray for the marathon but there were no other major hiccups.

Kerry Suter showed he was part-human by blowing up at 35km – but not fully human as he finished first (yet again) in just over 3 hours. Katy Dawson battled it out front, coming in second to Jo Johanson. Kevin Knowles finished 5th overall, so was only chicked twice. Katie Stone was the real star of the show, finishing strongly as third woman home. Dan finished without turning the colour of death (rewind to Tarawera photos), Ceana sauntered across the line, and Glen Larson finished injury free. There was mountain bike carnage on the course, with helicopter evacuations needed, but Ash stayed clear of the danger.

In the 24km, Glen Sexton had a great race leading the whole way and finishing just shy of course record time. Hooge had a great day out embracing competitiveness to come 3rd. I finished with a smile (2nd female – Ed.), Lisa Joblin looked like she had fun, and Elsbeth Broadbridge had a sprint finish battle. Gary Clare represented Hawks over in the 11.5.

We rehydrated well that night. And we learned a few things like who has the best dance floor moves, the strength of Clive Start’s hugs, not to wear open toe sandals if waltzing with Kev, Buddy (Curly Jacob’s dog) is the biggest chic magnet and that wine still tastes nice straight up from the bottle. Thanks everyone for making it such a fun weekend x