About 26 Hawks runners showed up to run at the Te Awamutu Golf course. In the 12k Jai Davies-Campbell an Tim Stewart had a Battle Royale with Tim Stewart taking line honours. Kirsten Milne took out the womens 12k. the JW 3k was won by Grace Ritchie ahead of Charlie Miller with Hawks taking the top 4 spots. In the female 6k Emerson Deverell was 1st with Bridget Deverell in 2nd. In the Relays Glenns Mob (Dan, Glenn, Shona, Glenn) Beat out Team Hardcore (Rog, Jean, Hay, Darryl) for first place. It was a great course to run on and the organisation by Murray Green and Te awamutu Athletics Club was spot on. At Prizegiving even with over 100 entries nearly everyone got a spot prize.

Play of the Day – Team Hardcore for showing up and registering 5 minutes before (warming up, what is that) 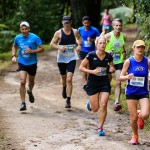