Saturday saw the 2015 New Zealand Mountain Running Championships take place in the Grampian Hill range, Nelson. The events rotates between an uphill only and an up and down course. This year it was the turn of the up and down event. I had been challenged by Corey Hinde to compete in the event against him, which seemed like a good idea at the time. However, the challenge did not materialise (I expect to see you at the event next year Corey!), so I was the sole Hawk in Nelson.

Despite a decent weather forecast the rain began to fall before the first race was underway. I had not looked at the course before running, but we were warned at the start line that the first downhill section would be very slippery, as some athletes who fell later found out to their cost. The first ascent was 300m of vertical gain in 1.8k, which started on tarmac, followed by a short gravel road, bush tracks and then proceeding to a final very steep segment that had been turned to mud by the rain.
I was encouraged to be running up with the leading group of three senior men for the first uphill as my expectations were low due to a lack of training and now having joined the over 40s masters age group. The turnaround at the top allowed me to see that I was well clear of the 4th placed senior athlete and was on course to win the masters event comfortably. The descent was tricky and having reached the summit with the eventual winner Dougal Thorburn (Wellington Scottish), he disappeared into the distance, showing his strong downhill running skills.  At this point I was also regretting my decision to stick with road trainers rather than invest in off-road shoes.

What followed was an exhilarating descent down a wide muddy grass track, then through the bush on tight twisting single  track, followed by gravel roads and a fast tarmac road with sweeping bends to finish the lap. Keeping the leaders in sight I managed to finish the first lap in 3rd overall, however the lack of training told on my final lap and I was passed by one senior athlete on the climb. Again, at the second summit I could see I had a large gap on the athletes behind, so I was able to be cautious in the wet, slippery conditions and cruise down the final descent to take the masters title.

Whilst it has been noted that numbers of participants for the event were low this year, this is something that those in the mountain running community and Athletics New Zealand are keen to address. I can only encourage Hawks club members to consider competing at next year’s event. It was great fun and held in a welcoming and supportive atmosphere on a great course. It also caters for a wide ranges of ages and abilities, with a youngest competitor of 12 and an oldest of over 70 years of age.  I hope to see some of you take up the challenge next year of the uphill only mountain run. As a mountain running novice I had been unsure what to expect, but I found it to be a thoroughly enjoyable experience, a lot of fun and very challenging.

Report and results at Athletics NZ 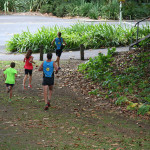