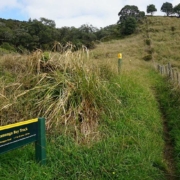 It started with an early drive from Hamilton to Waihi to meet Marc and then carpool down to Waihi Beach in time for the race briefing at 8:15 am. We then gathered on the beach for the start. Marc and I cruised the beach at a low 4min per kilometre pace for 500 metres to be in the first dozen to enter the Orokawa Bay Track till it reached Homunga Bay Beach. Through out this I was keeping Marc and another seasoned Nuggeter in reach and only losing sight of them both as Marc did his renowned speedy descents through the bush. Then it was up a 9.6% grade climb over 2kms, appropriately named as a Strava segment called “Nugget climb of death”. A good proportion of steeper sections we walked and as I was aiming to keep my heart rate in control at around 90% max I was happy to stay with them. As the climb began to level off a bit I took the opportunity to get ahead and have some buffer against Marc’s speedy descents and needed to prove that my summer of close to PB 5km races under my belt would give me the win against Marc whose been doing a year or more of endurance training for the GodZone event which was held a couple of months ago.
At the first aid station at the top of the hill I grabbed a couple of pieces of pineapple as I was aware I needed something to keep me going and not having my own carry cup I couldn’t grab the electrolytes available. As I was passing through a volunteer told me I was in 5th position and gave me confidence to now start working harder to pick up at least a place or two. The climb continued and I managed to pass the 4th place runner who was clearly already broken and in the distance I could see 3rd place which was good. I decided to keep the constant pace and heart rate by just keeping him in sight until around the 8km to go point where I came up along side and had a friendly chat. In hindsight I may have given away too much intel as he raced off when I gathered some more fruit to assist my water only supplements.

I wasn’t too concerned as I thought I had the 3rd position in the bag… alarm bells started when my heart rate started peaking while not even climbing or pushing the pace. I carried on for a few more kms and then started feeling pretty bad, so much so all I wanted to do was dream about finishing and laying down in a fetal position. It got worse and I was close to complete shut down. I kept telling myself as I saw the 2km to go sign that it was only less then 10 minutes to end the nightmare. As I got onto the final road stretch a volunteer was pointing at me and I stopped in the middle of the road in confusion… had I gone the wrong way… is this only for the multi-sport bikers. I chose to ignore and keep running and came to my senses that the route split into two for bikers and runners.

Finally I got to the last stretch, gave a quick look back and to my horror saw a guy behind who also looked 50+ and could grab the age group win. Surprisingly I managed to give it everything and ran as hard as I could to the finish line where I collapsed on to the chairs in exhaustion. Shortly after Marc came to my aid with Gels and whatever else he could find to get me out of the sugar deficient delirious state that I was in. It ended up only 18 secs between us and Marc finished in 5th place. The other guy didn’t pass and was in the duathlon event anyway. Towards the end I did expect everyone to start pouring past me and I was thankful that I managed to just hold it out to the end. Marc did admit that he often ran close along the tree lines to stay out of my sight and was keeping an account of the decreasing split times between us both.

I ended up with 4th place and 1st in the 50+ grade. The final result helped me forget the final traumatic 30 minutes – even if there was nothing in the seconds between us!

Well done to all the Hawks who competed and Malesa for coming 1st Women and Jono an an impressive time for his longest ever run. 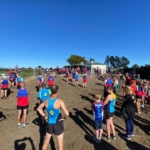 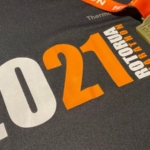