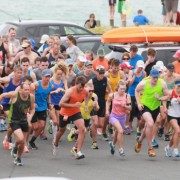 On the 27 of December 2015 I entered the Whangamata 10 km race. Looking around at the start to see who might be in contention, there was Marc, Brad and Matt Scott lining up. Thinking quietly to myself this is the day for  a good result there are a few other guys who looked likely but I didn’t know who they were.

Off we went in a steady pace going though the first km in 3.31. I was thinking it felt slow so took to the lead of the pack and increased the pace a bit and it was nice to look to my right and have Jeff (my brother-in-law) there beside me.  We had taken the race front together and were in charge of things. Matt tucked in behind, as well as 3 others, so it was a good pack of 6 but slowly we started dropping them off.
The eventual winner Sam McCutcheon said to us as we went though the 2 km mark, “Wow you guys are keen – we have 8 km to go.”

Right I thought – knuckle down, smash some kms out, and see how things are going to pan out. Things started to change when we had our first real hit into the wind. Jeff was there still and had worked out the pace was going to be too hot for him so quickly told me to tuck in behind him and he’ll tow me up into the wind (I would pay this back to him a week later in the Waihi beach run). Matt locked in behind me as well. At the completion of the first lap we were down to 4 – who was going to leap who was going to pop?

I told Matt to go – “don’t wait for me” – so here I was, leading at half way and 500 meters down the road I was 4th. Was I the one who was popping? Nope, not at all, as at the 6 km mark my second wind came in and I was 3rd, and hot on Matts heels. I gained a bit then lost a bit to him, but by the time we got back to the massive wind leg I was ready to pounce and a quarter of the way up I did. I knew I had to make it stick so I lifted my pace a bit more.

Going into the last 800 meters I though “have I got a bigger enough gap?” so I increased again and with the line in sight I knew I had him. 2nd two years in a row and a new 10km PB of 34..22. Matt came in 3rd seconds behind, and to my surprise Jeff had dug deep to come in 4th.

Great runs by all Hawks! 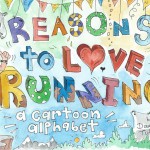