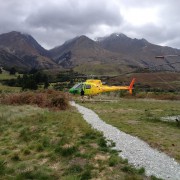 A recent trip to Wanaka to see family gave me the excuse I needed to run the Routeburn Track – a 32k tramping track that starts from the road to Milford Sound and heads over a range or two to the northern tip of Lake Wakatipu (Queenstown Lake).  The easiest way was to drive to Glenorchy, hire a helicopter (and pilot) and fly to the start.  I justified this by shouting my brother’s family as well, who had never been in a chopper, the trip over as payback for all the times they have accommodated our visits.

The weather on the day was typically alpine, making for limited views, but that is the nature of the Southern Alps.  Attired in all my cold/wet weather running gear, with plenty of gels and chocolate bars and a bucketload of concrete pills, I disembarked the chopper at a little campsite south of the Key Summit and ran the 20 minute track to join the main Routeburn track.

From there it was a gradual ascent through some bush for about 1 ½ hours to Lake Mackenzie where it opened out to a very ‘Tussock Traverse’ style atmosphere with a climb which went on forever.  In some vicious wind and rain over the top of the Harris Saddle I was greeted by a group of trampers having a breather in a small DOC shelter.  Stopping wasn’t an option as I was a little cold and wet and needed to keep moving.  Continuing down the other side I soon spotted a spiral of smoke ahead which turned out to be a DOC hut (Routeburn Falls) with DOC staff inside standing around a fire.  I must have looked cold as they stripped my top off, wrapped me in a large swandri jacket and woolly hat and handed me a hot cuppa.  They wrung out my thermal etc and hung them by the fire.

Twenty minutes later, nice and warm, it was off with the jacket, on with the steaming thermal, plus an extra thermal donated from the DOC lost property bin, to run the last hour of easy downhill through beautiful bush to the car park where Jenny and my sister in law were already formulating a rescue plan given the agreed cut-off time was fast approaching.

The end time was 4 hours 20 minutes, and another bucket list item ticked off. 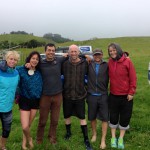 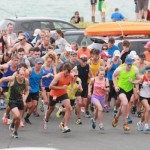