There were challenging weather conditions for this 2nd event which attracted 496 finishers. The heavy clouds and cold showers kept post entries down to 86. It was not a fast course on Sunday due to the surface water, muddy grass finish and the first 9kms into an easterly wind however there were a remarkable number of PB’s run by Hawks members. The club half marathon ranking list saw a number of changes.

Emerson Deverell won the women’s section of the 5km with 19.07.

It was pleasing to see Steve Rees-Jones running again after struggling all year with an achilles heel problem and he took out the 10km win in 33.52. While his time was not up to his usual best conditions were a challenge and slowed times. Kris Moore 38.08, Oscar Emery 42.11 Trish Stockman 43.51 and Sandra Jensen 47.48 were other Hawks names noted in the 10km.

I felt deeply for the unreal wet muddy conditions the time keeping team had to work in so a huge thank you to Graeme Dudfield and his team who plugged on amongst the tent drips, flowing rain water and gradually deepening mud and got the times out easily by 1 pm.

All in all a well run event that is proving popular and makes some good dosh for the Cambridge Club and the WBOP centre. 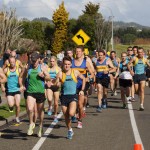