Sweeney Cup was held at Horsham Downs on Saturday and a huge thank you to Graham Dudfield who was day organizer. As the club has no handicapper I like his idea of self handicapping which seemed to work well. A strong walking group turned up including three octogenarians. There was an impressive walk from Barb Wilson who did 1.01.40 for the 8.1km

Wendy Harris won the Sweeney Cup in her first season of serious running but she had to run hard to hold off a fast finishing masters women trio of Maureen Leonard, Tracey Greenwood and Helen Hall-King.

As the first serious club road trial for the national road relays there were some quite determined efforts. Emily Roughan now being guided by John Tylden had a strong run and was scything through the 51 person field to take fastest womens time with 30.18. Katy Dawson also had a strong run to be quickest masters in 30.57 with Kirsten Milne close up in 31.06.

Kerry Suter was back marker and caught 20 places to take fastest time honours in 26.22.

Impressed with the attitude of the masters men who all started together and had a head to head full on hard race which is needed to be successful at national road relays. Tony Olsen cracked on the pace from the start to clock 27.40 followed by Kent 8 seconds back with just three seconds ahead of John Crane. Well done guys. 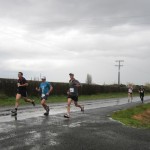 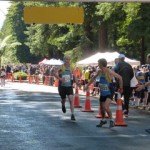