After a mixed bag of weather throughout the week Saturday dawned fairly clear although somewhat windy and a little bit chilly for the Hawks XC club champs.  The grounds were quite sloshy in places although not quite the mud-fest that it has been on previous years.  There was a great turnout of both runners and spectators with a field of 56 adults and children ready to race.

A big thanks to Gordon and his team who worked hard to get the course all set up and ready in time, and Graham who managed the race timing and results.  Also thank you to all those who contributed to the yummy afternoon tea spread.

Performances to note on the day:
Isaiah Priddey fastest over 3km in 10:54 with his brother Jacob quickest over the 6km running it in 20:42.

Kent took out the MM40 6km race and running it in exactly the same time as last year.  Kent and John did their weekly contest together, although missing their other contestant Glenn who was on his way to the Gold Coast.

Corey, Lance and Michael toughed it out doing the 9km race. Corey coming 1st in the 9km running it in 33:23.

Emily Roughan was the fastest over the 5km distance in 19:39, followed by Katy Dawson 42 seconds later to win the MW40.

Click on photo below for slideshow. Thanks to Bryan Mayall, Brendon McLaughlin and Lillie Harris for taking photos. 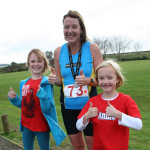 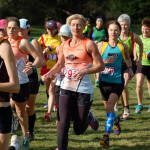