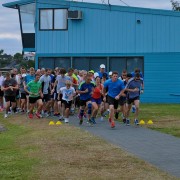 Members may be interested to know the Hamilton Lake features prominently in the history of Hawks.

When I joined the club in 1962 we were still gypsies. Our opening day pack run was held at a church hall in Matai St, Maeroa.

The club executive forged a link with Hamilton Yacht Club who were about to build their club rooms beside the lake. Our first days there, the premises were a mere concrete pad.

We became their tenant for the next ten years or so and their club rooms were our home base.  Whenever we weren’t away at another venue, this was where we ran from.  Traffic was far less busy at the time. At one point Hawks lent money to the Yacht Club to help finance their club rooms.

With Innes Common undeveloped, and the hockey fields were yet to arrive, we had a cross country option available over the back. It was a bit rough and peaty, but a cross country course nevertheless.  One year we hosted Calliope and ran the Paterson Cup there.

There were good road options as well. The road had just developed as a sandy path close to the lake edge. I have fond memories of my first win of the Baybutt Barometer, on handicap, once around the lake, finishing on the sandy road.  And also in subsequent years, running club champs around the lake from the yacht club. There were good pack run options, and sometimes the seniors would run around the Mormon temple for about 10 miles.

We ran our club road champs around the lake. Just once for juniors but three and a half laps for 10 miles/16 ks for senior.

We moved away from the yacht club to Seddon Park in the early 1970s, because we got a good deal at Seddon Park which included showers.

Today we haven’t lost our link with the lake. Members still run around it. And it is the venue for the Parkrun which some members run. 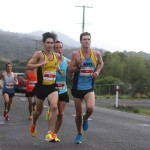 A blast from the past
Scroll to top