There was a great turn out of both existing, returning and new members on the 2014 Open Day on what was a beautiful and hot autumn’s day.  It was great to see so many people sign up for the new season and complete their membership forms.

Glenn (Club President) shared some opening words and then Bryan Mayall (Patron) shared his history with the Harriers and Hawks before officially declaring the 2014 season open. (See above opening address).
Everyone then headed off outside for a 5km pack run on the familiar course up to Sandford Park and back.  The speed demons lined up at the front, the bulk of the pack lining up next followed by all the children who were doing the 2km distance.

Kris Moore – was given his first responsibility as Vice Captain which was to act as lead bike and head off to the turnaround point with the orange road cone to clearly mark the spot of return – particularly for all the newbies.  This very quickly turned to disaster when he got a puncture not far from the start.  Some very kind runner (identity unknown) took it upon themselves to lay out some pine cones at the turnaround – not quite the same as the bright orange cone but it seemed to do the trick as the message was passed down the line to look out for the pine cones.

A great day was had by all with a real sense of excitement for the upcoming season. 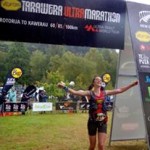