What a fantastic weekend for the Hamilton City Hawks at the 2014 Tarawera Ultra Marathon held in Rotorua on the 15th of March. The numbers speak volumes for our club’s participation level, with forty-two (minimum) club runners entered in the various events. This number equates to 5% of the total field and made up 18% of the relay teams who participated on the day. In all we had Hawk’s members in twelve (out of 65) relay teams and no less than nine confirmed solo entrants. High fives to our club’s turnout!

Due to the threat of Cyclone Lusi and the associated logistical impact on safety, all courses were shorted, with the long course and relay becoming 69km whilst the short course dropped a mere 1km, to 59km. Some entrants have suggested that the nature of the changes (the addition of the meanest hill on the course) made the short course harder, as well as adding an increased element of difficulty to the long course. That being said, all efforts on the day were praiseworthy, especially given the wet and windy conditions courtesy of the tail end of a cyclone.

An abridged version (see full report via link below) of the honourable mentions for the day includes:

A big thumbs to all those who competed in the event; I was most impressed by our club’s turnout and subsequent results (on social and competitive levels – nudge nudge, wink wink). I would especially like to congratulate my ”fabulous seven” who all trained hard for the solo events and, by no miracle, all made it to the start line and completed their respective courses. Nice one team.

Editors Note: Big thanks to Hadley for this newsletter article and for all the time put in to upload the photos of our Hawks to our website and flickr account.

View the full Flickr collection of Hawks at Tarawera Ultra 2014 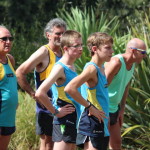