Hawks first night time race got off to a shaky start last Thursday night with heavy rain during the day having myself and Andrew considering postponing the event. At 5.15 we had doubts we would have the runners to make up a single 3 person team however by 5.30 we had 12 keen runners assembled and ready to meet 1 more at the gardens. With most adorned in their headlamps a quick reccie lap was run to make sure the new Hawks kicking tees with the shiny reflective tape could be seen. The race started and the team of Karen Hopson, Arianna Lord and Marc Scott lead from go to whoa. The other three teams had a seesaw battle and all finished within a few seconds of each other. The pre race reccie proved inneffective for Nato Campbell who had trouble negotiating the course without his night vision glasses and our Dutch friend Jan who led the final lap runners up the garden path. If he led the long way he would have no followers but he was taking a shortcut so we had no choice.

Thanks to those who turned up to run and made the race a success.

Special thanks to Dawn,Carl and Alba for making a surprise appearance to take photos. 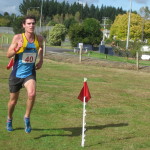 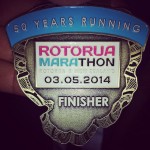