On Saturday the first harrier race of the season was held by Te Awamutu at the TA golf course. Over 80 runners and walkers took part. A little less than the organisers would have liked but still a solid turnout for so early in the season.Overnight rain left the course a bit softer than last year but also a bit slippery in places.The sun came out by 9.30 creating quite humid racing conditions.Hawks took out the trifecta in the 12k.Tim Stewart was well in front,followed by Kent Hodgson and Kevin Knowles.In the womens, Kirsten Milne took line honours, followed by Helen Hall- King. The 6km was won by a slightly hungover Tony Olsen, followed by Matt Greenfell. In the womens Emerson and Bridget Deverell took the honours.Charli Millar was the first girl in the 3km race.

The much anticipated relay had two quality teams.Team Scrambled Legs led out for the first 5km but couldnt hold out Team DGS.

The merit prizes were very generous and as usual there were heaps of spot prizes.

Note: Photos are below the results 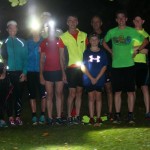