On January 4th 2015 I downloaded the entry form, filled it in  & with a 20 pound note I posted it to the Swaledale Outdoor Club Richmond , North Yorkshire, England.  My entry arrived – but the race was already full. Because I was willing to come so far they made a space for me & because my surname was Swale.

Once confirmed I set about training for the run. On the race profile I could see very steep climbs & descents. For the race I had to carry; first-aid kit, food & drink, gloves , hat , rain jacket, & leggings, whistle, map & compass, all crammed into my camel pack.

Our first stop was 3 days in London & a run in Regent park to loosen my legs from the long flight.  We then took the train to Darlington & a hire car to Richmond.  I ran with the Swaledale Road Runners on their Thursday night club outing.  We did a 40 minute jog around town.

The race day dawned cloudy & cool.  After check-in we gathered in a field  with the other 500 runners/walkers for a race briefing.  I was given a special welcome as I had travelled so far.  A bell was rung & off we went. My friend Jacqui Kearney who lives in Richmond did the run with me as my guide

50 metres later we were all walking  up a very steep hill.  This was the pattern for the day with steep climbs & descents, stoney roads & tracks, farmland with dead rabbits (everywhere it seemed) & their burrows kept you “on the hop”!

We passed through small villages with great names like “Cringley-Bottom”.  At halfway there was water cordial, fruit cake, sandwiches & fudge.  Jacqui’s husband Micheal took Penny to a viewing area 1 hour off road walk to the half-way point where we stopped for a chat while Jacqui ate her sandwiches.

On & on we went, the countryside changed from green pastures to barren land much like the Desert Road, to tree lined streams.  Finally Cringley-Bottom & only 3 miles to go!  Most of this was down hill, oh! my poor quads!  1 mile to go & we ran down a 2 metre wide track with stones everywhere-very tough when you are tired!

Back on to the road into a village called Reeth, past the corner pub & up a rise to the finish line inside the town hall.  Time to tuck into the spread of baked beans, mushy peas, mashed potatoes, mince, giant plate sized cornish pasties, fruit salad & cream rice.

OMG! I had done it!  5 hours & 5 minutes, 169th out of 452 finishers.  For my effort I got a certificate, a cloth race badge & a hand-made pottery mug commemorating the event. I was also mentioned on the website.

Time for a well earned beer at the corner pub & to watch the others finish.

P.S. After the race we were told of the broken legs, &  the heart attack casualties!  The shattered quads were all mine! 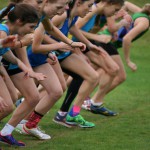 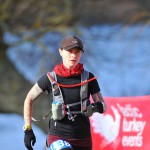