On Saturday, a great contingent of Hawks runners (and supporters) took to the road in search of some shiny glory in the land of the bay. The day saw some amazing accomplishments with many a PB and medal to be had. Lance Brew with an huge 2 mins PB.

The conditions were ideal from far but far from ideal with gusting winds proving a formidable competitor splitting the ranks throughout the races.

The Senior Men’s race saw some interesting battles with some intense tactical surges coming from the likes of Steven O’Callaghan. The front four quickly became two leaving only Steve and Tim Stewart battling it out for the win.

Tim’s pure tenacity to stick with the surges paid dividend, as he broke Steve and came away with the win. The battle for third was hotly contested by myself and the talented “Jacob Priddey”. It came down to the last 2km, where I kicked and managed to put some light between us, which held until the finish.

Congratulations to all Hawks place getters, in particular, our WaiBOP Champions:

Click on photo below to view slideshow.  Photos thanks to Tauranga Ramblers. 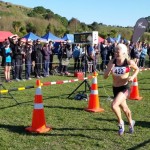 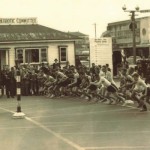 Round the Bridges – Past Winners
Scroll to top