The Waipuna course was firm and dry on Saturday for the champs and 33 Hawks travelled over the hill to take part. In light fields club athletes won 12 golds, 6 silvers and 7 bronzes so a fair bit of metal returned to Hamilton. Thanks to Kent for tent duty and for those supporters who were there.

Abdigani Ahmed and his brother Abdillahi gave the Hawks a great start when they placed 1st and 3rd in the Boys 10 2000 race while Corinna Decker-Thorburn took gold in the G10. There was a Hawks trifecta Isaiah Priddey, Sam Montgomery and Connor Tristram in the B14 race.

Waikato Dio’s Emerson Deverell and Mary Bollen were placings in the W18 race while in the Masters Women Hawks won three golds with Katy Dawson W35 (birthday on Thursday), Karen McCready W40 and Maureen Leonard W50. Jacob Priddey won the M20 race and had a great battle with Kyle MacDonald who took out the senior men’s title.

In the Masters men we were well represented with Kent Hodgson winning the M40 and Tony Olsen leading a Hawks trifecta ahead of John Crane and Glenn Sexton in the M45 with Kevin Knowles and Brian Smith winning their M55 and M80 races. Helen Rountree won the 8000 women’s race in 30.45. All in all a solid days racing over a demanding course and excellent preparation for the national champs on our own Minoque Park course.

Results below the photos 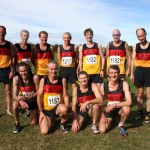