Conditions on Saturday morning saw steady rain and easterly winds.  From the start in the half marathon, Karen Hopson and Fiona Goddard disappeared into the distance, not to be seen until the turn around where they were a long way in front of me. At the turn around, Cory Whiting was in 3rd place and going strong.  Next was John Bowe, who managed to make the start line on time.   Bridget Ray, who was seen rushing home 10 minutes before the start, had a great race and finished 2nd masters woman. Antoinette Turton and Kay Jones, both had good runs in the half marathon as well. Chris Rodgers had a good run in the 10km and finished in 6th place.  Cory Whiting’s mum and dad also competed in the 10km with Kelvin coming in just ahead of Karen.  Lance Brew, on coaches orders, ran the 5km as speed work and was first home in this event.Gordon Speirs also competed in the 5km event. Graham Dudfield and his team did a great job with the time keeping. 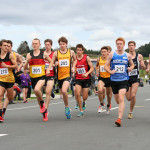 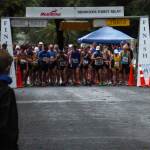