The 26th North Island Cross Country Champs was held on Saturday in mild dry weather on the challenging but fast Spa Park course. One had to search for any sign of mud and there was a strong Hawks presence in numerous events with many successes. John T and I were proud to be Hawks and vocally supporting the blue and yellow singlet. A huge thanks to Mike Harris and his team for establishing the club tent beside a tall in flower banksia from which we were serenaded by cavorting bellbirds and tuis. Was there a touch of early spring? It made the ever special Taupo cross country event even more memorable and it is an event I just love attending. For a cross country nut like myself this event is close to the pinnacle of our winter sport and attracts large numbers.

The coaching work done by Vaughan Priddey in developing our young teenagers with his squad training was clearly evident in the younger grades. Jacob ran a very confident race front running and on the second lap he was dominant and ran a course record of 15.51 compared to 16.27 last year to win the M18 race. Younger bro Isaiah was 3rd in the B14 race with Sam Montgomery 7th and Connor Tristram 8th.

Tim Stewart had a break through run with his impressive 4th in the senior men’s 9000. It was his first run in the open grade and we wish him all the best for his six month track stint in the USA. He departs to the States the day after running the national cross country at Minogue Park.

I was really chuffed with my three athletes Katy running 5th in the masters women placing 1st in W35 grade. Emerson was 4th and Helen R 3rd to make me think that I should spend more time coaching than planting trees. As Helen reminds me however with her name rounTree she is very much part of my tree scene anyway.

Emerson Deverell’s fourth in the U18 grade was an eye catching effort for a first year harrier. Still not used to the fast start that teenagers use she was back in 20th place after the first km but then worked her way through to 4th with a gradual increase in pace to come through the field strongly.

I was impressed with the performance of our three senior women. Helen R was third, a one place improvement on last year when she ran 18.53. This year she ran 18.32 and that was in the middle of a heavy training phase so it was a strong run by Helen. Emily Roughan, our Taranaki track import now doing a Sport and Leisure course at Waikato Uni, was a close up 6th just ahead of barefooted triathlete Mikayla Nielsen who is shortly to depart overseas for some triathlete training and racing.

These three form the nucleus of our senior women’s team for the NRR. Who else will make this team to defend the title they won last year?

At least 36 from the club took part.

Provisional results can be viewed here 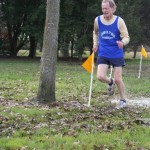 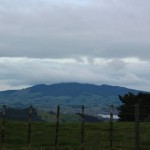